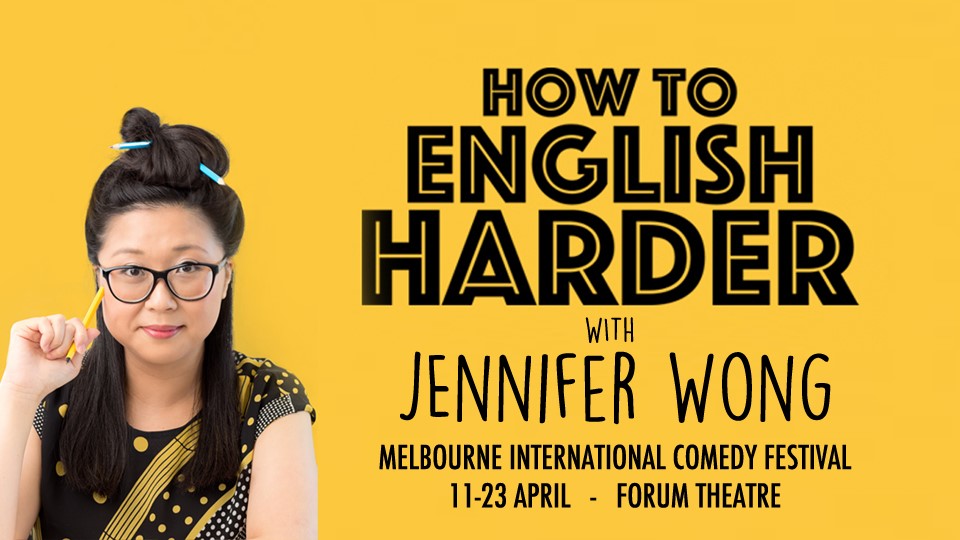 My new Melbourne International Comedy Festival show starts on Tuesday 11 April, and I've set up a special 2-for-1 deal for friends on Wednesdays and Thursdays!

How to English Harder mashes up a Learn English cassette tape with stand-up to create a new comedy for anyone who's ever been lost for words. Don’t miss this officially unaccredited course! Two weeks only. [Language warning: English.]

'The super likable star of ABC's Bookish is a low-key delight… perhaps Sydney’s most polite comedian, she’s also one of its funniest.” The Guardian
'I’m besotted with Jennifer Wong, this little PA in Plonk. Such a find.' Margaret Pomeranz, Screen
'Wong displays the unique talent of a punner on the run... Intelligent, engaging and unashamedly uncool comedy from a deeply endearing up-and-coming comic.' Squirrel Comedy'Smart wordplay and elegant cheek.' Sydney Morning Herald

- Bookish on ABC iview, a weekly program with author interviews and comedy sketches about books and reading.
- ABC Radio Sydney's Thank God It's Friday comedy hour, hosted by Richard Glover.
- Plonk, a six-part comedy starring The Chaser's Chris Taylor as host of a fictional wine show called Plonk.
- An interview on ABC RN's Earshot about language and its problems.

Back to all News & Events

Not a member?
Find out why you should be